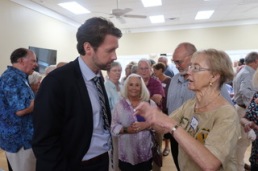 More than 80 enthusiastic Seabrook and Kiawah residents turned out to meet candidate Joe Cunningham on October 9 at the Oyster Catcher Community Center. Joe started his remarks expressing his desire to overcome the current political environment that is pitting neighbor against neighbor, and instead finding ways for all Americans to work together to address the issues facing the country.

The attentive and energized crowd responded positively as Joe outlined his positions including the right to affordable health care for all, protecting Medicare and Social Security, and his consistent opposition to offshore drilling. Along with highlighting his belief in transparency and honesty from our representatives, he pointed out his refusal to take money from PACs, and his belief in term limits.

Following his remarks, Joe mingled with the crowd for over an hour responding to questions and comments. Many in attendance signed up to help out on Joe’s campaign, through phone and text banking and door to door canvassing.

Watch the SIAN website and emails for future news about Joe’s campaign and opportunities to support our next Congressperson.